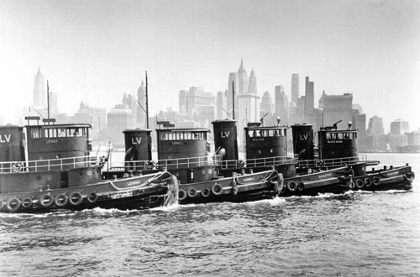 Based in Bethlehem, Pennsylvania and Incorporated on September 20, 1847 as the Delaware, Lehigh, Schuylkill and Susquehanna Railroad Company.

On January 7, 1853, the company's name was changed to the Lehigh Valley Railroad. It was also known as the Route of the Black Diamond, named after the anthracite it transported.

In 1864, Lehigh Valley began acquiring feeder railroads and merging them with it's own system. The first acquisitions were the Beaver Meadow Railroad and Coal Company and the Penn Haven and White Haven Railroad. In 1866 the company acquired the Lehigh and Mahanoy Railroad (originally the Quakake Railroad). A further round of acquisitions took place in 1868, with the addition of the Hazelton Railroad and the Lehigh Luzerne Railroad. With these acquisitions, the Lehigh Valley obtained the right to mine coal as well as transport it.

Following the Great Depression, the railroad had a few periods of prosperity. However the company had already begun a slow decline. Passengers preferred the convenience of automobiles to trains, and airlines provided faster long distance travel than trains. Oil and gas were supplanting coal as the fuel of choice. The Depression had been difficult for all the railroads, and Congress recognized that bankruptcy laws needed revision. The Chandler Acts of 1938-9 provided a new form of relief for railroads, allowing them to restructure their debt while continuing to operate. The LVRR was approved for such a restructuring in 1940 when several large mortgage loans were due. The restructuring allowed the LVRR to extend the maturity of its mortgages, but needed to repeat the process in 1950. The terms of the restructurings precluded dividend payments until 1953 when LVRR common stock paid the first dividend since 1931. In 1957, the LVRR again stopped dividends.

Two final blows came in the 1950's. The passage of the Federal Aid Highway Act in 1956. Better known as the Interstate Highway Act, and the opening of the Saint Lawrence Seaway in 1959. The interstate highways helped the trucking industry offer door to door service. And the St. Lawrence Seaway allowed grain shipments to bypass the railways and go directly to overseas markets. By the 1960's railroads in the East were struggling to survive. This caused a cascade of failures throughout the East.

On June 21, 1970, the Penn Central declared bankruptcy and sought bankruptcy protection. As a result, the PC was relieved of its obligation to pay fees to various Northeastern railroads—the Lehigh Valley included—for the use of their railcars and other operations. Conversely, the other railroads' obligations to pay those fees to the Penn Central were not waived. This imbalance in payments would prove fatal to the financially frail Lehigh Valley, and it declared bankruptcy just over one month after the Penn Central, on July 24, 1970[37] (this date has often been misquoted as June 24th due to an error in Robert Archer's definitive history of the Lehigh Valley, The Route of the Black Diamond).

The Lehigh Valley remained in operation through a 1970 bankruptcy, as was the common practice of the time. In 1972, the Lehigh Valley assumed the remaining Pennsylvania trackage of the Central Railroad of New Jersey, a competing anthracite railroad which had entered bankruptcy as well. The two roads had entered a shared trackage agreement. In this area in 1965, to reduce costs as both had parallel routes from Wilkes Barre virtually all the way to New York, often on adjoining grades through Pennsylvania.

On April 1, 1976, major portions of the assets of the bankrupt Lehigh Valley Railroad were acquired by Conrail. The remainder of the assets were disposed of by the estate until it was folded into the non railroad Penn Central Corporation in the early 1980's.