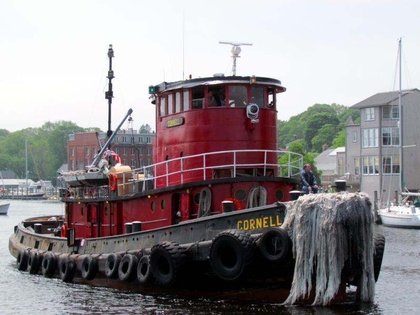 Built in 1950, by Jakobson Shipyard Incorporated of Oyster Bay, New York (hull #329) as the Cornell for the Lehigh Valley Railroad Company of Bethlehem, Pennsylvania.

The tug was constructed to serve as a means of transporting railroad cars via barges, across New York harbor from 1950 to 1971. She was the first of four tugs constructed for the Lehigh Valley Railroad Company. All of the tugs were powered by diesel-electric propulsion.

One major difference that set the Cornell, and her identical sister the Lehigh apart from the other tugs of their class. Was that the two were designed to operate in the Harlem River in New York City without the need any bridge openings.

The tugs were designed with an air draft of 24(ft) that allowed for a minimum clearance of 12(in) from the lowest bridge at mean high water. No other rail tugs of the same class were constructed with those restrictions taken into consideration.

In 1971, the tug was acquired by the Ross Towboat Company of Boston, Massachusetts. Where she retained her name.

In 2003, she was phased out of active service. And the tug was "laid up" at Boston Towing and Transportation's yard in East Boston, Massachusetts.

In 2007, the tug was acquired by the Lehigh Maritime Corporation of Valhalla, New York. Where she retained her name.

In 2007, while berthed in Greenport, New York the tug was cleaned, and repairs where made. She was then repainted in her original Lehigh Valley Railroad Company colors. The Cornell then relocated back to Kingston, New York. Which is located on the west side of the Hudson River. Where she continues to serve as a commercial towing vessel, as well as a training platform for towing vessel operators. 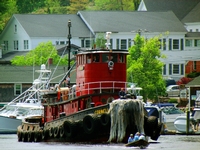