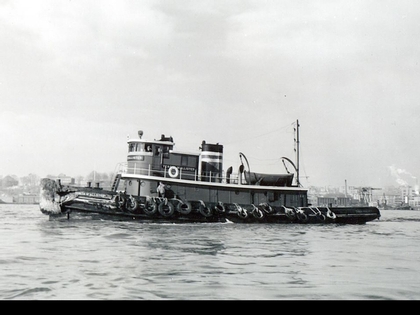 Built in 1927, by Crowninshield Shipbuilding of Fall River, Massachusetts as the Betty.

The tug was later sold, where she was renamed as the Catherine Pope.

The tug was then acquired by the Card Towing Company of Norfolk, Virginia. Where the tug was renamed as the Rowen Card.

In 1943, the tug was acquired by the McAllister Brothers Towing Company of New York, New York. Where she was renamed as the Teresa McAllister.

In 1953, she was sold. The tug is no longer listed in documentation. Her current and, or final, disposition is unknown. She was a single screw tug, rated at 600 horsepower.


Back to METROPOLITAN SAND AND GRAVEL COMPANY