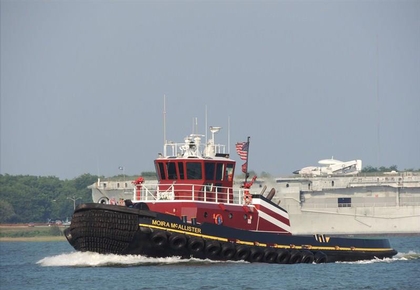 Built in 2003, by Washburn and Doughty Associates of East Boothbay, Maine (hull #80) as the Independent for the Marine Towing of Tampa Company of Tampa, Florida.

In 2007, the tug was chartered to SeaBulk Towing Services Incorporated of Fort Lauderdale, Florida. Where the tug retained her name.

In 2010, she was returned to Marine Towing of Tampa of Tampa, Florida. Where the tug retained her name.

In 2014, the tug was acquired by McAllister Towing and Transportation of New York, New York. Where she was renamed as the Moira McAllister.

The tug is outfitted with an additional Caterpillar 3406TA diesel engine. Rated at 440 horsepower, turning at 2,100(rpms). Driving an Aurora 411 centrifugal fire pump. Supplying two 1,500 Gallon Per Minute, SKUM Fire Monitors. With water, and AFFF nozzles, as well as a self protection "deluge" system.


Back to MARINE TOWING OF TAMPA INCORPORATED