Built in 2009, by the Marinette Marine Corporation of Sturgeon Bay, Wisconsin (hull #820) as the Dublin Sea for K-Sea Transportation Partnership Incorporated of East Brunswick, New Jersey.

Her construction was originally contracted by the Sirius Maritime Company of Seattle, Washington. With the intention of servicing a long term charter to Tesoro Company of San Antonio, Texas.

She is fitted with an INTERcon coupler system featuring a 50(in) diameter pin. The system includes a "lightering system." This system allows for continuous adjustment of the tug's height between the tug and the barge, as the draft of the barge changes during loading and unloading procedures.

The Dublin Sea is "married" with a 543(ft), 150,000(bbl), double hulled, barge. The DBL-185, which was constructed simultaneously in 2009. By the Bay Shipbuilding Group of Manitowoc, Wisconsin for the K-Sea Transportation Partnership of East Brunswick, New Jersey. 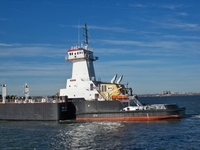 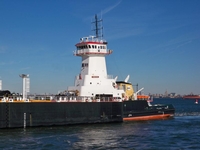