Built in 1982, by Jakobson Shipyard Incorporated of Oyster Bay, New York (hull #466) as the Exxon Maine for the Exxon Shipping Company of Wilmington, Delaware.

In 1990, the Exxon Shipping Company renamed the tug as the Exxon Carquinez.

In 1993, in the wake of the Exxon Valdez incident. The Exxon Shipping Company was rebranded as the SeaRiver Maritime Company of Houston, Texas. Where the tug was renamed as the S/R Carquinez

In 2002, she was acquired by the McAllister Towing and Transportation Company of New York, New York. Where she was renamed as the Justine McAllister.

Powered by two, sixteen cylinder, EMD 16-645-E6 diesel engines. With Falk reduction gears, at a ratio of 4.481:1. She is a twin screw tug, equipped with kort nozzles, and flanking rudders. For a rated 4,000 horsepower.

Her towing gear includes an INTERcon, single drum, towing winch. Outfitted with 2,300(ft) of 2 1/4(in) towing wire. She is also outfitted with an elevating wheelhouse, with a maximum height of eye of 45(ft). As well as one fire monitor rated at 2,000 Gallons Per Minute.
(Robert Silva, Captain Thomas Steinruck, Auke Visser, Captain Brian Fournier) 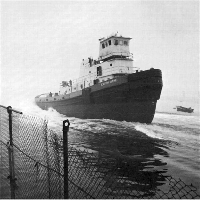 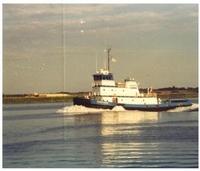 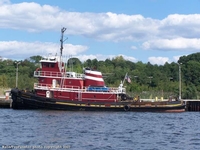