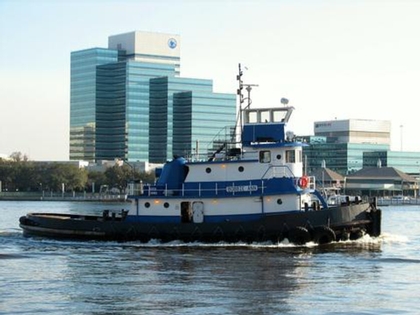 In 1982, she was acquired by Offshore Incorporated of Mobile, Alabama. Where tug the retained her name.

The tug was later acquired by Ireland Marine Transportation Incorporated of Chesapeake, Virginia. Where she was renamed as the Goose Creek.

In 2005, she was acquired by the Kosnac Floating Derrick Corporation of Staten Island, New York. Where the tug was renamed as the Vera K.

In 2010, the tug was acquired by the Gore Marine Corporation of Townsend, Georgia. Where she was renamed as the Bobbie Ann.

Named for the mother of the Gore Marine Corporation's founders, Bobbie Ann Gore. And, the tug was outfitted with an upper wheelhouse.

Her electrical service is provided by two, 30kW generator sets. Driven by two, 371 Detroit Diesel diesel engines. The tug's capacities are 20,500 gallons of fuel, 500 gallons of lube oil, and 3,350 gallons of potable water.


Back to IRELAND MARINE TRANSPORTATION INCORPORATED