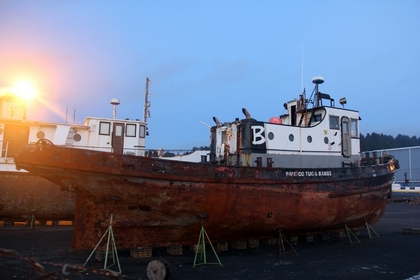 Built in 1944 by Hickinbotham Brothers Construction at Stockton, California as the Hickinbotham I for in-house use.

The tug was later acquired by the Pacific Towboat and Salvage Company of Long Beach, California. Where she was renamed as the Helix.

In the late 1970's Pacific Towboat and Salvage was acquired by and became a subsidiary component of the Dillingham Corporation of Honolulu, Hawaii.

As part of a restructuring in 1986, along with all other Dillingham maritime transportation operations, the company was placed under the Foss Maritime umbrella.

In 1987, Foss Maritime and its subsidiaries were acquired by Saltchuk Resources Incorporated of Seattle, Washington.

In 1991, she was acquired by Brusco Tug and Barge Incorporated of Longview, California. Where the tug was renamed as the Mary Ann Brusco.

Eventually, the tug was laid-up at Fields Landing, California on Humboldt Bay.

In 2016, she was acquired by Zerlang and Zerlang Marine Services of Samoa, California. Where the tug was renamed as the Mary Ann.


Back to PACIFIC TOWBOAT AND SALVAGE COMPANY