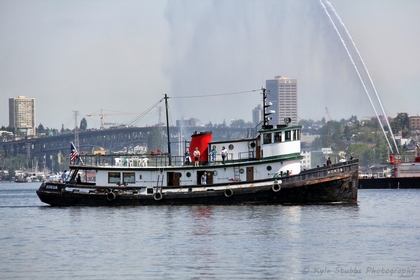 Pictured as: the Kokua (Douglas Raab) Photo by: Kyle Stubbs

Built in 1943 by the Puget Sound Boatbuilding Company of Tacoma, Washington as the TP-229 for the United States Army.

In 1947, the tug was acquired by Young Brothers Limited of Honolulu, Hawaii. Where she was renamed as the Kokua.

In 1949, the tug was acquired by the A.C. Dutton Lumber Corporation of Poughkeepsie, New York. Where she retained her name.

In 1954, the tug was acquired by the Sause Brothers Ocean Towing Company of Coos Bay, Oregon. Where the tug retained her name.

The tug was later converted into a private yacht and owned by a series of individuals. Where she retained her name.

In 2022, the tug drug anchor and grounded off of Kingston, Washington. The vessel was dismantled in place, and scrapped.


Back to YOUNG BROTHERS COMPANY INCORPORATED