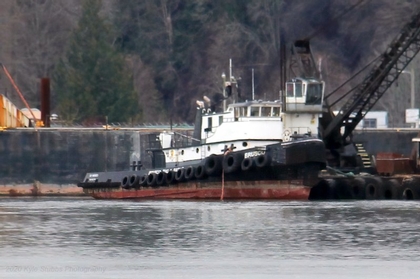 In 1968, the tug was acquired by the Pacific Towboat and Salvage Company of Long Beach, California. Where she was renamed as the Pacific Saturn.

In the late 1970's, the Pacific Towboat and Salvage Company was acquired by the Dillingham Corporation of Honolulu, Hawaii. Where the tug retained her name.

In 1986, as part of a restructuring. Along with all other Dillingham maritime transportation operations, the company was transferred under the Foss Maritime Company of Seattle, Washington. Where the tug retained her name.

In 1987, the Foss Maritime Company, and its subsidiaries were acquired by Saltchuk Resources Incorporated of Seattle, Washington. Where she retained her name.

In 1991, the tug was acquired by the Brusco Tug and Barge Company of Longview, Washington. Where she was renamed as the Bo Brusco.

In 2014, the Brusco Tug and Barge Company renamed the tug as the Brusco.

In 2015, the tug was acquired by Bristol Pacific Holdings of Cathlamet, Washington. Where she was renamed as the Bristol Persistence. And, was converted for use as a fish packer. She was a twin screw tug, rated at 2,200 horsepower.
(Kyle Stubbs)

Pictured as: the Bo Brusco (Brusco Tug and Barge) Photo by: George Schneider


Back to PACIFIC TOWBOAT AND SALVAGE COMPANY