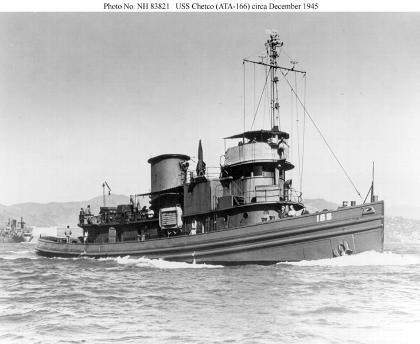 Pictured as: the AT-166 (Chetco) (U.S. Navy) Photo courtesy of: NavSource Online

Built in 1919, by the Bethlehem Steel Company of Elizabethport, New Jersey (hull #2129) as the Barryton for the United States Shipping Board.

In 1942, the tug was acquired by the Moran Towing Company of New York, New York. Where she was renamed as the Thomas E. Moran.

In 1943, she was acquired by the United States Navy. Where she was designated as the AT-166 (Chetco).

The tug was converted for Naval use at the Boland Machine Company of New Orleans, Louisiana. Upon entering service in World War II. The tug was allocated to the Asiatic-Pacific Theater. Serving in the Bismarck Archipelago operation, Admiralty Island landings, March 28th, 1944 to April 6th, 1944. And, the Hollandia operation, on April 21st, 1944 to April 25th, 1944. She received two battle stars for World War II service

In 1945, the tug was transferred to the United States Maritime Commission for sale, or reuse.

In 1946, she was decommissioned. And, "laid up" at the Puget Sound Naval Shipyard at Bremerton, Washington.

In 1947, the tug was acquired by the Moran Towing Company of New York, New York. Where she was renamed as the Neptune.

In 1948, she was involved in a collision, and sank. Powered by a single, Fairbanks Morse, diesel electric engine. Turning a single, fixed pitch propeller/ She was a single screw tug rated at 1,400 horsepower. 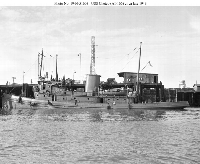 Pictured as: the AT-166 (Chetco) (United States Navy) Photo courtesy of: NavSource Online