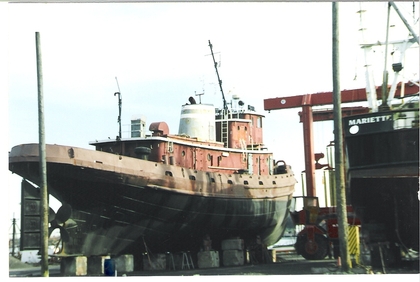 Built in 1947, by Gulfport Shipbuilding of Port Arthur, Texas (hull # 287) as the Tern for the Curtis Bay Towing Company of Baltimore, Maryland.

In 1977, the tug was acquired by the Norfolk Baltimore and Carolina Line (NBC Container Lines) of Norfolk, Virginia. Where she was renamed as the Olive H.

In 1986, the NBC Container Lines were acquired by the McAllister Brothers Towing Company of New York, New York. Where the tug retained her name.

In 1989, the the McAllister Brothers Towing Company renamed the tug as the Charles D. McAllister.

In 2006, she was acquired by the Tucker Roy Marine Towing and Salvage Company of New Bedford, Massachusetts. Where she was renamed as the Camdyn.

In 2008, the tug went out of documentation. Her current and or final disposition is unknown. The tug was single screw, rated at 1,600 horsepower.