On March 29th, 1922, after delivering the two schooner barges, the Virginia Palmer, and the Robert Palmer to a dock in Norfolk, Virginia. The Bess had backed away from her barges when she was struck amidships by a steam ship. Her crew was rescued, and the tug was salvaged.

In 1928, the salvaged tug was acquired by the McAllister Brothers Towing Company of New York, New York. Where the tug was "laid up" at McAllister Towing's yard in Jersey City, New Jersey.

In 1939, the McAllister Brothers Towing Company was rebuilt. And, converted to diesel propulsion. For a rated 450 horsepower. Where she was renamed as the James McAllister.

The tug is no longer listed in documentation. Her current, and or, final disposition is unknown. Originally powered by a single, steam engine, placed amidships. Turning a single, fixed pitch propeller. For a rated 400 horsepower. Her capacities were 75 tons of coal bunkers forward, and 10,000 gallons of water in one tank fitted aft. With another corresponding tank for drinking water. 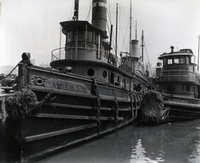