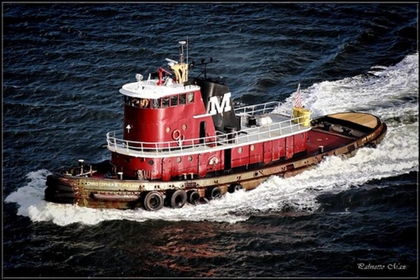 Built in 1953, by Jakobson Shipyard Incorporated of Oyster Bay, New York (hull #346) as the Bethlehem for the Lehigh Valley Railroad Company of Bethlehem, Pennsylvania.

In 1976, the tug was acquired by the Crescent Towing and Salvage Company Incorporated of New Orleans, Louisiana. Where she was renamed as the Shannon Smith.

In 1978, she was acquired by the Turecamo Coastal and Harbor Towing Corporation of New York, New York. Where she was renamed Christopher B. Turecamo.

In 2014, the tug was acquired by an undisclosed interest based in Guyana. Her current, and or final disposition is unknown.

Originally powered by a single, Cleveland 16-278A diesel electric engine. In 1983, the tug was repowered with a single, Alco 251 diesel engine. She was a single screw tug, rated at 2,800 horsepower.
(Paul Strubeck)