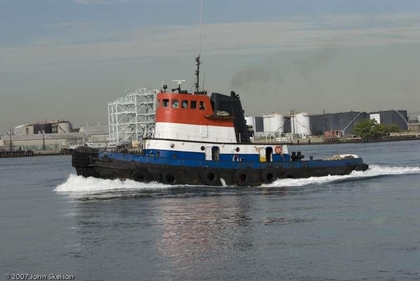 Pictured as: the Charles Oxman (Vinik Marine) Photo by: Unknown

The company would later be owned by George Steinbrenner. Who also owned the New York Yankees. Under that ownership, the company became the Bay Transportation Company of Tampa, Florida. Where the tug was renamed as the St. Petersburg.

In 1998, the Bay Transportation Company was acquired by Hvide Marine Incorporated of Fort Lauderdale, Florida. Where the tug retained her name

She was originally powered by a single steam engine. The tug was later redesigned, and outfitted with a sixteen cylinder ALCO diesel engine. She is a single screw tug, rated at 3,600 horsepower.
(Chris Scarborough)