Built in 1939, by the Mare Island Naval Shipyard at Vallejo, California (hull #YT134) as the YT-134 (Wahneta) for the United States Navy.

In 1947, she was acquired by the Curtis Bay Towing Company of Baltimore, Maryland. Where she was renamed as the C. Stewart Lee.

In 1971, she was acquired by the Bay Towing Company of Norfolk, Virginia. Where the tug was renamed as the Bay Prince.

In 1998, the tug was acquired by the Indian River Towing Company of Wilmington, Delaware. Where the tug was renamed as the Marie Swann.

The tug is no longer listed in documentation. Her current and or final disposition is unknown. She was a single screw tug, rated at 950 horsepower.
(NavSource Online, Dave Boone, Bill Roberts) 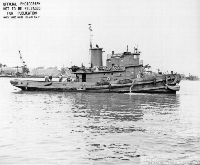 
Back to INDIAN RIVER TOWING, INCORPORATED