Built in 1963, by Southern Shipbuilding of Slidell, Louisiana (hull #58) as the Albert J. for Midland Enterprises Incorporated of Cincinnati, Ohio.

In 1974, the tug was chartered by Northland Marine Services of Seattle, Washington. Where she was renamed as the Polar Viking.

In 1977, the charter with Northland Marine Services ended. And, the tug was returned to Midland Enterprises of Cincinnati, Ohio.

In 1978, she was "bareboat" chartered to the Moran Towing Company of New York, New York. Where she was renamed as the Betty Moran.

While under charter, the tug towed Liberty Ships that had been converted to coal barges. Along the east coast of the United States. Under a charter to Eastern Gas and Fuel Associates of Boston, Massachusetts.

In 1974, the charter with the Moran Towing Company ended. The tug was returned to Midland Enterprises Incorporated of Cincinnati, Ohio. Where she was renamed as the Polar Viking

In 1975, the tug was chartered by the Boston Towboat Company of Boston, Massachusetts. Where she initially retained her name. However, later in 1976. The tug was renamed as the Ocean Gulf.

In 1976, the tug was returned to Midland Enterprises Incorporated of Cincinnati, Ohio. Where the tug was renamed as the Polar Viking.

However, the tug was transferred to SeaCoast Transportation of Seattle, Washington. Which was a non union oil and gravel subsidy of the Brix Maritime Company.

In 1993, the Brix Maritime Company was acquired by Foss Maritime Company of Seattle, Washington. Where the tug retained her name. However, the John Brix remained under the ownership of SeaCoast Transportation.

In 2011, the K-Sea Transportation Partnership was acquired by the Kirby Corporation of Channelview, Texas. Where the tug retained her name.

She was originally powered by two, twelve cylinder, Fairbanks Morse Opposed Piston diesel engines. With Philadelphia reverse/reduction gears at a ratio of 5.78:1. Turning two, four bladed, 156(in) by 114(in), fixed pitch propellers. The tug was repowered with two, EMD 16-645E2 diesel engines. For a rated 3,900 horsepower. 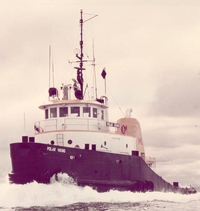 
Back to MIDLAND ENTERPRISES INCORPORATED