Built in 1965, by the Bollinger Machine Shop Incorporated of Lockport, Louisiana (hull #68) as the Triumph for the Piney Point Transportation Company of Chesapeake, Virginia.

The tug was designed, and built, with a low profile to pass underneath bridges on the Potomac and Anacostia Rivers in the Chesapeake Bay.

In 1997, the Piney Point Transportation Company was acquired by the Vane Brothers Company of Baltimore, Maryland. Where the tug was renamed as the Donna Kay.

In 2014, the tug was acquired by the Hays Tug and Launch Company of Wallingford, Pennsylvania. Where she was renamed as the Grape Ape. And, was outfitted with an upper wheelhouse. 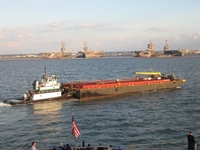 
Back to HAYS TUG AND LAUNCH COMPANY