In 2004, Odyssea Vessels Incorporated renamed the uncompleted tug as the Kathy C.

Although construction was initially begun for Odyssea Vessels of Berwick, Louisiana. When the deal unraveled with Odyssea Vessels, the Vane Brothers Company of Baltimore, Maryland acquired the unfinished tug from Thoma-Sea Shipbuilders.

Upon her completion, she was the first Patapsco class tug designed by Frank Basile of Entech and Associates of Houma, Louisiana. And constructed by Thoma-Sea Boat Builders for the Vane Brothers Company.

Named for the Patapsco River, which is a 39 mile long river in central Maryland which flows into Chesapeake Bay. The river's tidal portion forms the harbor for the city of Baltimore. With its South Branch, the Patapsco forms the northern border of Howard County, Maryland.

The name "Patapsco" is derived from the Algonquian word "pota-psk-ut." Which translates to "backwater" or "tide covered with froth."

In 2019, the tug was acquired by the Norfolk Tug Company of Norfolk, Virginia. Where she was renamed as the Steven Wayne. 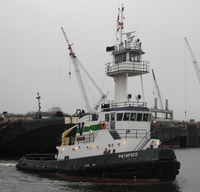 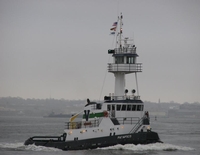