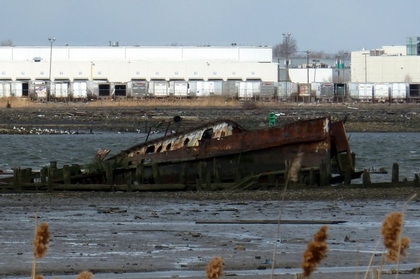 Built in 1919, by Defoe Boat Works of West Bay City, Michigan (hull #51) as the Maj. Albert G. Jenkins for the United States Army.

Commissioned as the steel hulled, Junior Mine Planter (JMP). She was assigned to the Fourth Service Command during World War II. And homeported at Fort Barrancas, Pensacola, Florida.

In 1951, the tug was acquired by the Oil Transportation Company of New Orleans, Louisiana. Where she was converted for use as a towing vessel. And, the tug was renamed as the Bayou Plaquemine.

In 1966, she was acquired by the Nickerson Marine Towing Company of Tampa, Florida. Where the tug was renamed as the Courier.

In 1968, the tug was acquired by the McAllister Brothers Towing Company of New York, New York. Where she retained her name.

In 1972, she went out of documentation. The tug was eventually acquired by the Witte Marine Scrapyard of Rossville, Staten Island, New York and abandoned in the Arthur Kill. She was a single screw tug, rated at 1,200 horsepower.
(Gordon Donovan, Will Van Dorp)


Back to OIL TRANSPORT, COMPANY