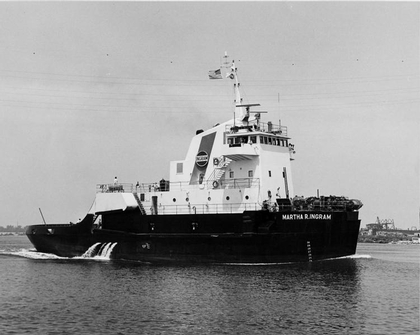 Built in 1971, by the Southern Shipbuilding Company of Slidell, Louisiana (hull #91) as the Martha R. Ingram for Ingram Ocean Systems Incorporated of Nashville, Tennessee.

In 1991, the tug was acquired by Maritrans Operating Partnership Incorporated of Tampa, Florida. Where she was to be renamed as the Discovery.

However, due to the costs incurred by the Maritrans Operating Partnership with the acquisition, and conversion of the Carole G. Ingram. Which became the Constitution Maritrans opted to scrap the tug in lieu of incurring the impending costs. She was a twin screw tug, rated at 11,000 horsepower.
(Neil Franklin)


Back to INGRAM MARINE GROUP INCORPORATED