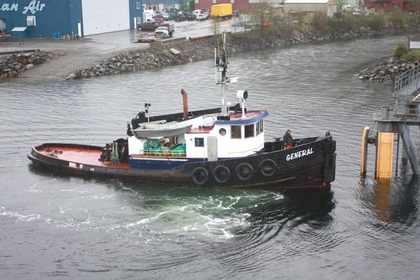 In 1966, the tug was acquired by the Marine Power and Equipment Company of Seattle, Washington. Where she was renamed as the MPE 166.

In 1972, she was acquired by the Pioneer Towing Company of Kenmore, Washington. Where the tug was renamed as the General.

The tug was then acquired by the Seley Corporation of Ketchikan, Alaska. Where she retained her name.

In 2005, she was acquired by C and O Marine of Ketchikan, Alaska. Where she retained her name.

In 2005, C and O Marine parters Rick and Wendy Olson obtained full control of the company and renamed it as Olson Marine Incorporated.

In 2017 she was scrapped at Ketchikan, Alaska.

Powered by a single Cummins diesel engine, turning a single five bladed, stainless steel propeller. For a rated 675 horsepower. The tug's capacities were 6,000 gallons of fuel, and 500 gallons of potable water.

Her towing gear consisted of a towing winch outfitted with 1,500(ft) 1.25(in) towing wire.