Built in 1977, by Main Iron Works of Houma, Louisiana (hull #320) as the Peter Foss for Foss Maritime of Seattle, Washington. A subsidiary of the Dillingham Corporation of Honolulu, Hawaii.

Although construction of the tug was begun for Foss Maritime. The tug was completed for the fellow Dillingham Corporation subsidiary, the Dillingham Tug and Barge Corporation of Honolulu, Hawaii. Where she was renamed as the Moana Hele.

In 1999, Saltchuk Resources Incorporated of Seattle, Washington, acquired the maritime assets of HEI: the Hawaiian Tug and Barge Company, and the Young Brothers Company.

In 2011, the tug was acquired by Olson Marine Incorporated of Ward Cove, Alaska. Where she was renamed as the Wendy O.

Powered by two Caterpiller 399 diesel engines, turning two stainless steel 90(in) diameter by 72(in) pitch propellers. For a rated 2,300 horsepower.

Her deck equipment consists of a Foss winch mounted on the bow and a Markey Towing winch. Outfitted with 2,000(ft) of 2.75(in) towing wire. 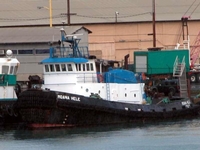 Pictured as: the Moanna Hele (Hawaiian Tug and Barge) Photo by: Foggy