She was nearly identical to another of Express Marine Incorporated's tugs, the Duty. With the exception of her length. The Duty is 97.9(ft), and the Honor was 89.6(ft). However she was not fitted with rubber pads on her sides.

The Honor was outfitted with an expanded air filtration capacity. Both, for use by air breathing engines, and for the interior. Much of the extra filtration equipment was located in the stack assembly of the tug. Air being drawn into the vessel whether it be for ventilation, or for internal combustion. Was drawn into a filter bank. Any air drawn down to the engines, or engine room was filtered twice.

Her towing gear consisted of a JonRie InterTech 500, single drum, hydraulic towing winch. Outfitted with 2,400(ft) of 1.75(in) towing wire. As well as a, JonRie InterTech 421 hydraulic capstans The capstans were mounted next to the tow winch and on the tug's bow. Power for the winch was produced by one, of the tug's three generators.

The tug was outfitted two hydraulic towing pins, and a hold down clamp, as well as a transom roller on her stern. And, a 10 ton North Pacific MCT-1030 hydraulic crane. With a telescoping boom and, a 30(ft) reach. Mounted on the second deck, aft of the wheelhouse. She was fitted with custom designed port, and starboard deck winches. For wire push gear, in lieu of using the towing winch for the push gear.

In 2015, the the was lengthened by 12(ft), and outfitted with a JAK-500 coupler system, and re powered with two, Tier III compliant, EMD 8-710T3 diesel engines. Her z-drives where removed, and replaced with two, fixed pitch propellers, mounted in kort nozzles. With quad rudders, and flanking rudders. The tug's wheelhouse was raised with a two deck tower, for a new eye height of 48(ft).

The converted tug, was "married" with a newly constructed barge the 460(ft), by 80(ft), by 22(ft), dry bulk barge, the EMI-2100. That was constructed in 2017, by Corn Island Shipyard Incorporated of Grandview, Indiana for Express Marine Incorporated of Camden, New Jersey.
(Wayne Huebschman, Captain Ted Bishop, Michael Daniels) 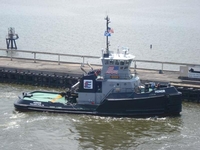 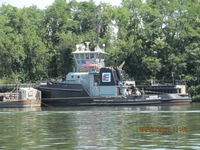 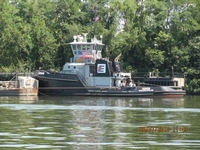 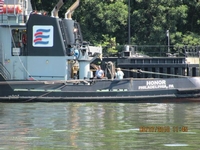