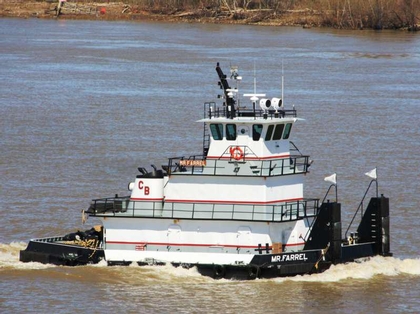 Built in 1980, by the Luis G. Ortis Boat Company of Krotz Springs, Louisiana (hull #87) as the Sand Dollar for Sand Dollar Marine Incorporated of Foley, Alabama.

In 1984, Sand Dollar Marine Incorporated renamed the tug as the Verne Dicharry Jr.

In 1994, the tug was acquired by Bollinger Gulf Repair Incorporated of New Orleans, Louisiana. Where she was renamed as the renamed as Lil' Ray.

In 2005, she was acquired by the Crosby Marine Transportation Company of Golden Meadow, Louisiana. Where she was renamed as the Mr. Farrel.

In 2019, the tug was acquired by the DMC Towing Company of Lafitte, Louisiana. Where she was renamed as the Lady Michelle.

Rebuilt in 2009, she is powered by two, Caterpillar 3412 diesel engines. With Twin Disc reduction gears, at a ratio of 7:1. Turning two, stainless steel, fixed pitch propellers. She is a twin screw towboat rated at 1,800 horsepower.


Back to SAND DOLLAR MARINE INCORPORATED