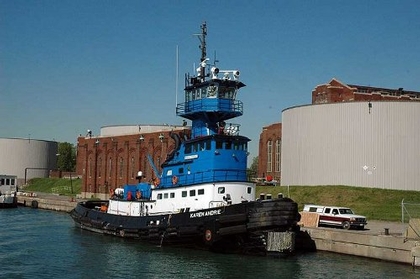 Pictured as: the Karen Andrie (Andrie, Incorporated) Photo by: Unknown

In 1993, the tug was acquired by Andrie Incorporated of Muskegon, Michigan. Where she was renamed as the Karen Andrie.

In 2009, the tug was modified with a JAK coupler system. And, was repowered with two eight cylinder GM EMD 8-710 G7CT2 diesel engines. The new engines were matched with the tug's existing pair of Falk reduction gears. Which were also refurbished as part of the repower. Turning via 12.5(in) shafts, two 120(in) by 80(in) three bladed, fixed pitch, stainless steel propellers. For a rated 3,600 horsepower.

The tug also was fitted with a new upper pilothouse. With all new controls and electronics. The tug also received a new engine exhaust system, new engine cooling system, and numerous other improvements. The tugs towing winch was also removed as part of the refit.

Pictured as: the Karen Andrie (Andrie, Incorporated) Photo by: Unknown 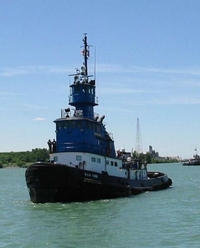 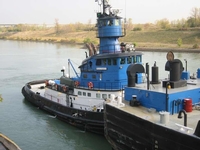 
Back to GULFCOAST TRANSIT INCORPORATED