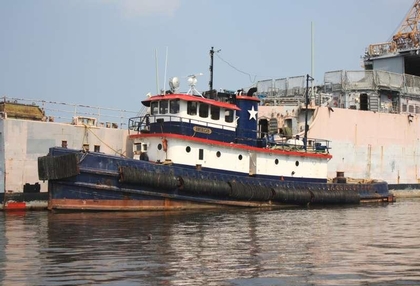 Pictured as: the American (Mullane Brothers) Photo by: John Curdy

In 2003, she was "outsourced" to the Vane Brothers Company of Baltimore, Maryland. Where the tug retained her name.

In 2006, the tug was acquired by the Dann Marine Towing Company of Chesapeake City, Maryland. Where she was renamed as the Chesapeake Coast.

In 2011, she was acquired by the Mullane Brothers Marine Transportation Company of Chincteague Island, Virgina. Where she was renamed as the American.

In 2012, the tug went out of documentation. The tug was "laid up" in the Southern Branch of the Elizabeth River in Chesapeake, Virginia. She was powered by a single, General Motors diesel engine. Turning a single, fixed pitch, propeller for a rated 600 horsepower.
(Vince Cucina, William L. Baxter, Dave Boone, John Curdy) 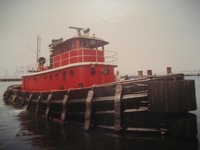 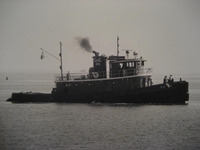 
Back to BALTIMORE GAS AND ELECTRIC COMPANY