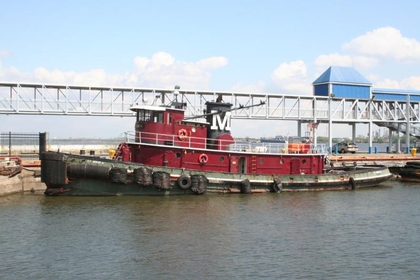 Built in 1940, by Harry A. Marvel and Company of Newburgh, New York (hull #225) as the Joseph Meseck for the Meseck Towing and Transportation Company of New York, New York.

In 1940, the tug was acquired by the United States Navy. Where she was renamed as the Metacom. She was converted for Naval Service at the New York Navy Yard at New York, New York.

In 1941, she was redesignated by the United States Navy as the YN-51 (Metacom). And, Allocated to the 3rd Naval District.

In 1946, the tug was placed out of service at Brooklyn, New York. And, struck from the Naval Register on December 13th, 1946. On February 26th, 1947 she was transferred to the Maritime Commission for delivery to her owners.

In 1947, she was returned to the Meseck Towing and Transportation Company of New York, New York. Where she was renamed as the Joseph Meseck.

In 1954, the Meseck Towing and Transportation Company was acquired by the Moran Towing Company of New York, New York. Where the tug was renamed as the E.F. Moran Jr.

The tug is no longer listed in documentation. Her current, and, or final disposition is unknown. She was a single screw tug, rated at 1,750 horsepower.
(NavSource Online)


Back to MESECK TOWING AND TRANSPORTATION COMPANY