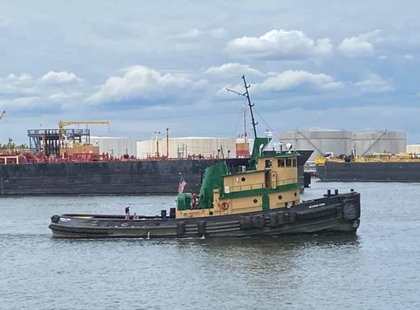 In 1973, the tug was acquired by the Turecamo Coastal and Harbor Towing Corporation of New York, New York. Where she was renamed as the Kathleen Turecamo.

In 2018, she was "laid up" at the Moran Towing Corporation's yard in Staten Island, New York.

In 2020, she was acquired by Stasinos Marine LLC. of Weymouth, Massachusetts. Where the tug was renamed as the Meaghan Marie.

Iin the mid 1990's, the tug was reconfigured. Where her controllable pitch propellers were removed, and replaced with air clutches, and gearboxes. And conventional fixed pitch propellers. She is a twin screw tug, rated at 1,700 horsepower.
(Captain Eric Takakjian)


Back to DIAMOND MANUFACTURING COMPANY