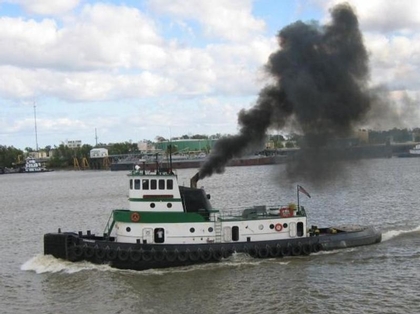 Built in 1957, by the Bethlehem Steel Company of Staten Island, New York (hull #8515) as the Buffalo for the Delaware Lackawanna and Western Railroad Company of Lackawanna, New Jersey.

In 1960, the tug was acquired by the Erie Lackawanna Railroad Company of New York, New York. Where she retained her name.

In 1971, she was acquired by Manatee Tug and Barge Lines Incorporated of Tampa, Florida. Where she was renamed as the Bradenton.

In 1994, she was acquired by the Bay Transportation Corporation of Norfolk, Virginia where she was renamed as the Commander.

In 2001, the tug was acquired by River Parishes Incorporated of New Orleans, Louisiana. Where she retained her name.

In 2007, River Parishes Incorporated was acquired by the Moran Towing Corporation of New Canaan, Connecticut. Where the tug retained her name.

In 2014, the tug was removed from active service and "laid up." Originally powered by a single Cleveland 8-498 diesel engine. The tug was later repowered with a single Alco 12-251C diesel engine. She was a single screw, rated at 1,200 horsepower.
(Paul Strubeck)


Back to RIVER PARISHES COMPANY INCORPORATED