Built in 1956, by Levingston Shipbuilding Incorporated of Orange, Texas (hull #556) as the Kathleen C. Tracy for the Avondale Towing Line Incorporated of New York, New York.

In 1972, the tug was acquired by the Bronx Towing Line Incorporated of New York, New York. Where she was renamed as the Bronx 5.

In 2008, the tug was acquired by Patriot Marine Incorporated of Winthrop Massachusetts. Where the tug retained her name. However, Patriot Marine never put the tug to work.

In 2009, she was scrapped at Providence, Rhode Island. She was powered by a single, Cleveland 16-278A diesel electric engine. Turning a single, fixed pitch propeller. She was a single screw tug, rated at 1,600 horsepower.
(Paul Strubeck) 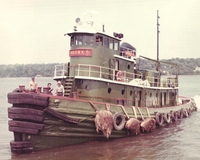 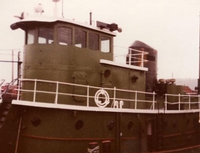 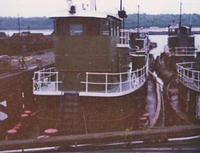 
Back to AVONDALE TOWING LINE INCORPORATED