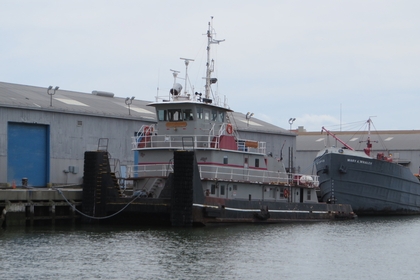 The tug was later acquired by East Coast Tender Services Incorporated of Sea Bright, New Jersey. Where she was renamed as the Capt. Jared.

In 1989, the Boston Towing and Transportation Company was awarded a contract with the Massachusetts Water Resources Authority. To Transport equipment to from Quincy, Massachusetts to Deer Island in Boston Harbor. Using roll on roll off (Ro-Ro) barges to support the construction of The Deer Island Water Treatment Facility. The contract was for the use of two tugs and two Ro-Ro barges, and lasted over ten years.

In 1999, the charter expired. And, the tug was transferred to the Reinauer Transportation Company's fleet in New York, New York. Where the tug retained her name.

In 2008, the tug was transferred to the Boston Towing and Transportation Company's fleet in Boston, Massachusetts. Where the tug retained her name.

In 2009, she was "laid up" at the Boston Towing and Transportation Company's Border Street yard in East Boston, Massachusetts.

In 2015, the tug was acquired by the Safer Tug and Barge Company of Egg Harbor City, New Jersey. Where she was renamed as the Big Jake.

Powered by two, EMD 12-645-E6 diesel engines. With Falk reduction gears. She was a twin screw tug, fitted with flanking rudders. For a rated 3,000 horsepower.

The towing equipment consists of a bow mounted capstan. The tug was also outfitted with an 8 ton crane, mounted on her stern.
(Paul Strubeck, Robert Silva, Captain Tom Rooney) 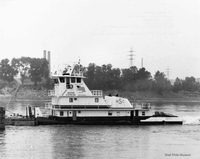 
Back to SPANIER MARINE INCORPORATED