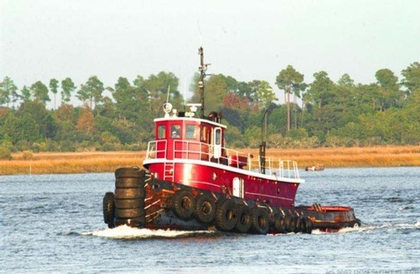 Built in 1945, by Consolidated Shipyard of Morris Heights, New York as the YT-393 (Nakarna) for the United States Navy.

The tug's keel was laid down in September of 1944. She was launched on October 28th, 1944. And, delivered to the United States Navy on February 6th, 1945. The tug was allocated to the 3rd Naval District.

Her primary function was to support the Navy in the New York area. There she provided assistance in the vicinity of anchorages and piers for berthing and docking evolutions. She also provided towing services, as well as waterfront fire protection. The tug also served as an inner harbor patrol craft. At the end of hostilities, she was placed out of service and berthed with the reserve units of the 16th Fleet at Green Cove Springs, Florida.

In August 1946, the tug was reactivated. And allocated to 6th Naval District at Charleston, South Carolina. In February of 1962, she was redesignated as the YTM–393. The tug continued to serve in support active forces of the Navy until 1970. The date she was placed out of service, and struck from the Naval Register is unknown.

In 1981, she was acquired by the St. Philip Coastal Towing Company of Tampa, Florida. Where she was renamed as the Gloria St. Phillip. The company would later be owned by George Steinbrenner. Who also owned the New York Yankees. Under that ownership, the company became the Bay Transportation Company of Tampa Florida.

In 1998, the Bay Transportation Company was acquired by Hvide Marine Incorporated of Fort Lauderdale, Florida. Where the was renamed as the Hillsborough.

In 1999, she was acquired by McAllister Towing and Transportation of New York, New York. Where she was renamed as the Carlo McAllister.

In 2010, the tug was acquired by the Sante Shipping Company of Miami, Florida. Where she was renamed as the Sante' Teo.

In 2013 the tug went out of documentation. Her current and or final disposition is unknown.