Pictured as: the Naupaka (K-Sea Transportation) Photo by: John Wilson

Built in 1983, by Marco Shipbuilding Incorporated of Seattle, Washington (hull #457) as the Naupaka for the Mid-Pacific Towing Company of Honolulu, Hawaii.

In 2016, she was acquired by the P and R Water Taxi Company of Honolulu, Hawaii. Where the tug was renamed as the Kaku.

In 2017, the tug went out of documentation. Her current, and or final disposition is unknown. She was a twin screw tug, rated at 800 horsepower. 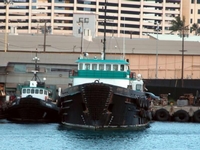 
Back to SMITH MARITIME COMPANY INCORPORATED