Built in 1975, by Main Iron Works Incorporated of Houma, Louisiana (hull# 291) as the Driver for the Interstate Oil Transportation Company of Philadelphia, Pennsylvania.

In 1997, the tug was acquired by Barge Bulk Transport Incorporated of San Juan, Puerto Rico. Where she retained her name.

In 2002, she was acquired by Dawn Marine Services Incorporated of Gretna, Louisiana. Where she was renamed as the Arctic Dawn.

In 2016, the tug was acquired by American Tugs Incorporated of San Juan, Puerto Rico. Where she was renamed as the Don Jaime. 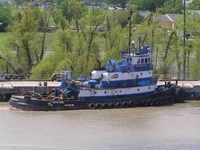 
Back to SONAT MARINE COMPANY INCORPORATED