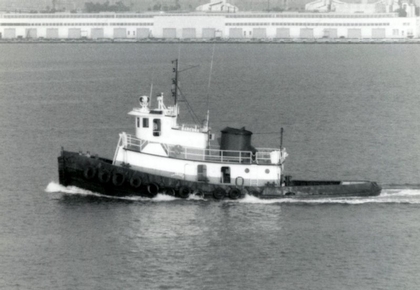 Pictured as: the Barcona (Connolly-Pacific Company) Photo by: George Schneider

Built in 1957 at Morgan City, Louisiana as the Michele A. Defelice for the Defelice Marine Towing Company of Lake Charles, Louisiana.

The tug was later acquired by the Connolly-Pacific Company of Long Beach, California. Where she was renamed as the Barcona.

On June 4, 1989, while towing a pair of empty barges from Long Beach, California to Santa Catalina Island, the tug's towline was snagged by the submerged United States Navy submarine USS Houston. As a result the stern of the tug was pulled underwater, allowing water to enter through an open hatch, and sinking the tug with the loss of one crewman. The tug was not salvaged.


Back to DeFELICE MARINE TOWING COMPANY