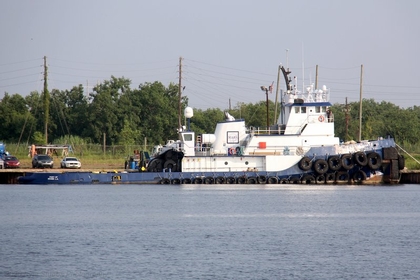 Built in 1968 by the McDermott Shipyard Incorporated at Amelia, Lousiana (hull #147) as the Alison C. for Midland Enterprises Incorporated of Cincinnati, Ohio.

In 1968, the tug was allocated to a Midland Enterprises subsidiary, the Red Circle Transportation Company of New Orleans, Louisiana, for operation on the company's coastal and ocean routes.

In 2001, she was acquired by the Teco Ocean Shippping Company of Tampa, Florida. Where the tug was renamed as the Teco 1.

In 2006, the tug was acquired by Offshore Express Incorporated of Houma, Louisiana. Where she was renamed as the Offshore King.

In 2017, she was acquired by Modern American Recycling Services Incorporated of Gibson, Louisiana. Where the tug was renamed as the M.A.R.S. Titan.

In 2006, the tug was rebuilt and repowered with two, 16 cylinder, EMD diesel engines. She is a twin screw tug, rated at 6,000 horsepower.

Her electrical service is provided by two, 100kW generator sets. The tug's capacities are 120,000 gallons of fuel, and 35,134 gallons of water

The towing equipment consists of a double drum, SMATCO 72 DD WF winch. Outfitted with 2,300(ft) of 2.25(in) cable on her primary towing drum.


Back to MIDLAND ENTERPRISES INCORPORATED