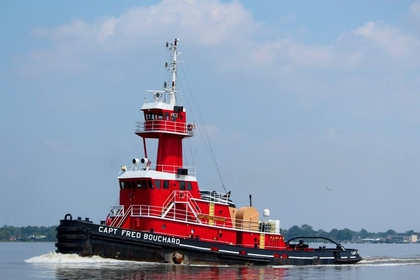 Built in 1981, by VT Halter Marine Incorporated of New Orleans, Louisiana (hull #1035) as the Capt. Fred Bouchard for the Bouchard Transportation Company of Melville, New York.

In 1990, the tug was chartered along with the newly built barge the B. No.240 to the Mobil Oil Corporation of New York, New York.

In 1999, the Mobil Oil Corporation's 140,000(bbl) barge Seneca. Which had been constructed in Sturgeon Bay, Wisconsin was completed. The Capt. Fred Bouchard was tasked with the barge's delivery. As well as transporting the barge until the Mobil Oil Corporation's Articulated Tug and Barge (ATB) Mohawk. Was delivered "light tug" from J.M. Martinac Shipyard in Tacoma, Washington.

In 2000, the charter ended. And, the tug was returned to the Bouchard Transportation Company of Mellville, New York. Where the tug retained her name.

In 2020, she was acquired by RQ Construction Incorporated of Carlsbad, California. Where she was renamed as the Addy Lou II.

Also, a keel cooled 99kW generator set driven by a Detroit Diesel 8V-71 diesel engine was installed. The third engine drives the electic generator, or the backup hydraulic pump. Any of the three generators can be used to operate the INTERcon coupler system. 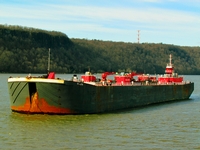 
Back to RQ CONSTRUCTION INCORPORATED