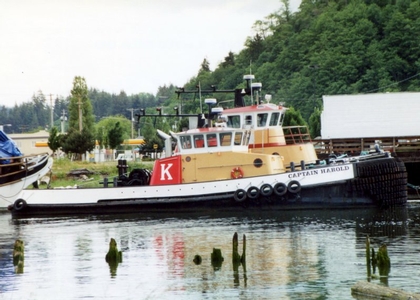 Built in 1967 by the Bill Williams Welding Shop at Long Beach, California as the 1062 for the Smith-Rice Derrick Company of Alameda, California.

In 1974, the Smith-Rice Derrick Company became a subsidiary of Crowley Marine Services of San Francisco, California. Where she was renamed as the Tug 1062.

By 1986 she had been renamed as the Storky II and acquired by the Knutson Towboat Company of Coos Bay, Oregon.

In 2002, the tug was stripped to a bare hull, then rebuilt and renamed as the Captain Harold.

In 2019, she was acquired by the Coos Bay Towboat Company of Coos Bay, Oregon. Where the tug retained her name.

Rebuilt in 2002, the tug was later repowered again in 2003. The tug is Powered by two, twelve cylinder, Cummins KTA 38 diesel engines turning two, fixed pitch propellers in kort nozzles. She is a twin screw tug, rated at 3,000 horsepower.


Back to SMITH RICE DERRICK COMPANY