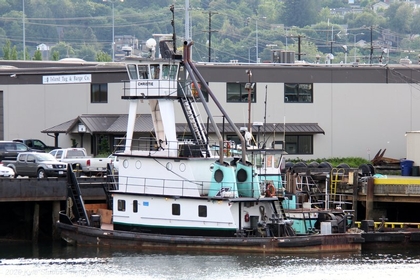 Pictured as: the Christie (Combined Forestry) Photo by: Kyle Stubbs

Built in 1965, by the Umpqua River Navigation Company of Reedsport, Oregon as the Jupiter for in-house use.

In 1970, the Umpqua River Navigation Company was acquired as a subsidiary of Bohemia Incorporated of Eugene, Oregon. Where the tug retained her name.

In 1984, she was acquired by the Sea Coast Transportation Company of Seattle, Washington. Where the tug was renamed as the Chinook.

In 2000, the tug was acquired by the Island Tug and Barge Company of Seattle, Washington. Where she was renamed as the Island Breeze.

In 2015, she was sold to Combined Forestry and Marine Services of Woodland, Washington. Where the tug was renamed as the Christie.

She is a twin screw tug.


Back to ISLAND TUG AND BARGE COMPANY