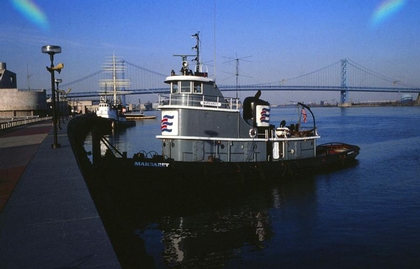 On May 8th, 1917 the tug was commissioned by the United States Navy. Where she was designated as the SP-366 (Charles P. Crawford). And assigned to Minesweeping and Towing operations in the New York City area. The tug was also outfitted with two, one pound guns.

On August 12th, 1919 the was returned to the Erie Railroad Company of Jersey City, New Jersey. Where the tug was renamed as the Akron.

In 1953, she was then acquired by C.G. Willis Incorporated of Norfolk, Virginia. Where the tug was renamed as the Carteret.

The tug was eventually acquired by the Tucker Towing Company of Camden, New Jersey. Where she was renamed as the Margaret.

The Tucker Towing Company was eventually acquired by the Oliver Transportation Company of Philadelphia, Pennsylvania. Where the tug retained her name.

In 1960, the Oliver Transportation Company became Express Marine Incorporated of Camden, New Jersey. Where the tug retained her name.

She was later acquired by the Morehead City Towing Company of Morehead City, North Carolina. Where the tug retained her name.

In 2007, she was sunk as part of an artificial reef off of the New Jersey coast.

Originally powered by a single, double compound, steam engine, rated at 700 horsepower. With a 155 (psi) Scotch boiler. In 1953, the tug was re powered with one surplus, EMD 12-567A diesel engine. From a World War II Landing Ship Tank (LST). She was a single screw tug, rated at 1,200 horsepower.
(Wayne Huebschman) 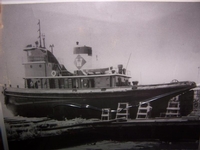 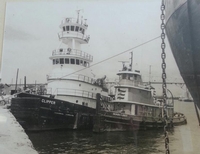 
Back to OLIVER TRANSPORTATION COMPANY