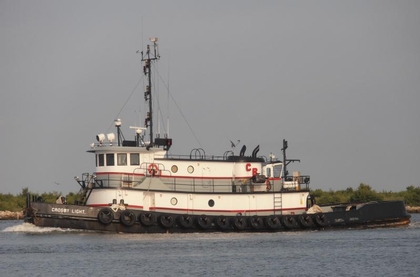 Pictured as: the Crosby Light (Crosby Marine) Photo by: Photo by: Glen Daigrepont

In 2000, the tug was acquired by the Offshore Rig Moving Company of Galliano, Louisiana. Where she was renamed as the J.A. Hardy.

In 2001, she was acquired by the Crosby Marine Transportation Company of Golden Meadow, Louisiana. Where she was renamed as the Crosby Light.

Powered by two, Caterpillar 3516 diesel engines. With reduction gears, at a ratio of 6:1. She is a twin screw tug, fitted with kort nozzles, rated at 6,000 horsepower,

Her electrical service is provided by two, 40kW generator sets. The tug's capacities are 30,000 gallons of fuel oil, and 6,000 gallons of potable water.


Back to OFFSHORE RIG MOVING COMPANY