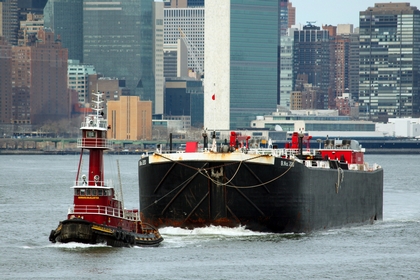 Built in 1969, by Halter Marine Services Incorporated of New Orleans, Louisiana (hull #226) as the Ocean Star for the Sheridan Towing Company of Philadelphia, Pennsylvania. A subsidiary of Ira S. Bushey and Sons of Brooklyn, New York.

In 1977, Ira S. Bushey and Sons was acquired by the Hess Oil Corporation of New York, New York. To form the Spentonbush-Red Star Company of Brooklyn, New York.

In 1979, she was returned to the Spentonbush-Red Star Companies of Brooklyn, New York. Where she was renamed as the T.J. Sheridan.

In 1998, the tug was acquired by the Bouchard Transportation Company of Melville, New York. Where she was renamed as the Bouchard Boys.

In 2006, she was acquired by the McAllister Towing and Transportation Company of New York, New York. Where she was renamed as the Barbara McAllister.

In 2016, the tug was "laid up" at McAllister Towing and Transportation's yard at Charleston, South Carolina.

In 2020, she was acquired by Mar-K Towing Company of Panama City, Florida. Where the tug was renamed as the Patsy K.

Her electrical service is provided by two, 125kW generator sets. The tug's capacities are 37,512 of fuel, 945 gallons of lube oil, and 5,017 gallons of potable water

Her towing equipment consists of an INTERcon 200, single drum, towing winch. Outfitted with 2,000(ft) of 2(in) towing wire. 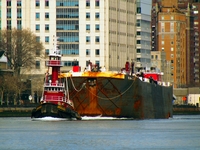 
Back to SHERIDAN TRANSPORTATION COMPANY INCORPORATED