In 1999, Offshore Marine Contractors Incorporated renamed the tug as the Raimy Eymard.

In 2005, the tug was acquired by A.T. Cheramie Incorporated of New Orelans, Louisiana. Where she was renamed as the Russell A. Gisclair.

In 2007, the tug was acquired by the Marquette Transportation Company of Jefferson, Louisiana. Where she was renamed as the Mr. Russell.

In 2014, the tug was acquired by the Tappan Zee Constructors of Tarrytown, New York. Where she retained her name.

Where the tug worked as a support vessel on the construction of the new Tappan Zee Bridge over the Hudson River at Terrytown, New York.

In 2018, she was acquired by La Carriers Transportation Services Incorporated of Larose, Louisiana. Where the tug was renamed as the Lady Terea.

Powered by two, Caterpillar 3412D diesel engines. With Twin Disc MG 5170 reduction gears, at a ratio of 6:1. Turning two, 78(in) by 60(in) stainless steel, fixed pitch propellers, mounted in kort nozzles. She is a twin screw tug, rated at 3,000 horsepower.

Her electrical service is provided by two, 40kW Delco generator sets. Driven by two, Detroit Diesel 471 diesel engines. The tug's capacities are 26,000 gallons of fuel, 250 gallons of lube, and 8,500 gallons of potable water. 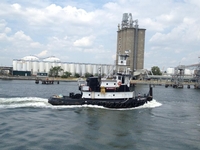