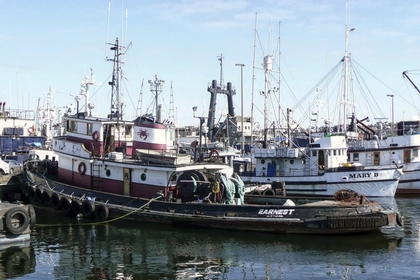 Built in 1942, by the Nunes Brothers Company at Sausalito, California as the Admiral Vickery for the Permanente Metals Corporation of Oakland, California.

Named for Howard L. Vickery, a Vice Chairman of the U.S. Maritime Commission. Rhe tug was one of a pair, constructed to support operations at Kaiser's Richmond Shipyard No. 2 during the World War II shipbuilding effort.

In 1945, the tug was acquired by the Nakat Packing Corporation of Ketchikan, Alaska. Where she was renamed as the Ann S.

In 1998, she was acquired by the Campbell Towing Company Incorporated of Wrangell, Alaska. Where the tug was renamed as the Ernest.

In 2000, the tug was acquired by an individual named Michael Young of Bellevue, Washington. Where she was renamed as the Earnest.

In 2008, she was acquired by Big Claw Maritime Incorporated of Seattle, Washington. Where the tug retained her name.

She was later acquired by an individual named Isaac E. Enyart. Where the tug retained her name.

The tug was then acquired by an individual named Clay J. Noank. Where she retained her name.

In 2016, she sunk while being scrapped at Goble, Oregon on the Columbia River. Powered by a single, six cylinder, Atlas Imperial Diesel engine. She was a single screw tug, rated a 1,125 horsepower.
(Kyle Stubbs)


Back to ISAAC E. ENYART