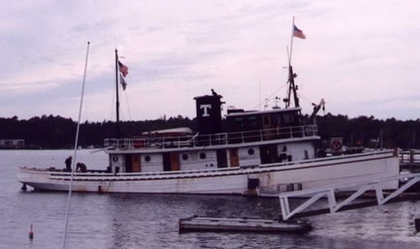 Built in 1930, by M. M. Davis & Son of Solomons, Maryland. She was designed by Boston naval architect John Alden.

Her design was heavily influenced by the preferences of the tug's owner, the Mystic Steamship Company and its subsidiary Boston Towboat.

The tugboat also featured an innovative propulsion plant. Powered by Two Winton Model 130 diesel engines with six cylinders, four stroke cycle engines turning at 300 rpm, airless (mechanical pressure) fuel injection rated at 325 horsepower each for a total rating of 650 horsepower. Her electrical service was provided by a pair of General Electric DC generators.
The tug's capacities are 12,000 gallons of distillate diesel fuel (No. 2 grade) (40 tons) in four riveted fuel tanks in the engine room; her lube oil is placed in bulk storage in one vertical, cylindrical tank inside deckhouse, and her potable water is stored in one rectangular tank in forefoot below forecastle. Powered by two diesel engines, each turning a generator and exciter to create DC current, which was shunted (via prototypical switchboards) to a single DC motor (weighing 20 tons) attached to a single propeller shaft. The project was exhibited as a showpiece for Thomas Edison's General Electric Corporation, which seized the challenge to design, build and deliver the components, in conjunction with their control subcontractors.

Six years after Luna's delivery, GE reported that there were thirty three diesel electric tugs in service, of which twenty one were GE installations.

The Luna's wooden hull and deckhouses were constructed by the M.M. Davis Shipbuilding Company. The empty hull was towed from the Chesapeake to East Boston for outfitting at the Bethlehem Steel Shipyard in East Boston. Upon completion, the Luna was delivered to the Mystic Steamship Company of Boston. She was the first diesel powered tug in the fleet. All the other tugs in the Mystic Steamship fleet (commercially known as the Boston Towboat Company) were driven by coal as well as oil fired boilers and or steam engines.

The Luna and her sister, the Venus were the most powerful tugs, they were also considered the most reliable reliable, as well as being considered the most efficient as well. The majority of the work involved docking and undocking ships in every part of greater Boston Harbor, from Salem, Massachusetts including Plymouth harbor in Plymouth, Massachusetts. The tug primarily serviced tankers, freighters, refrigerated cargo ships, passenger liners, warships, and large barges within Boston Harbor. On occasion she would operated between Maine and New York on assignments.

During World War II, the Luna was mobilized by the United States Navy and United States Army as a civilian crewed but privately owned and managed tugboat at shipyard, repair yards, terminals, piers and anchorages from Bath, Maine to the Cape Cod Canal. The Luna handled the many ships launched at the yard. This included guiding damaged ships into drydock, and the towing of damaged ships in the harbor from seagoing rescue tugs. She also undocked warships, transports and troopships bound for war, towed barges that were loaded with ammunition, stores and fuel.

The Luna was dubbed the flagship of the Boston Towboat fleet until the end of World War II, when modern surplus war built tugs were sold off by the government. In the 1950's General Electric featured the Luna in their marine advertisements for almost two decades. The Luna also assisted U.S.S. Constitution with its annual turnaround.

As more diesel tugs and diesel electric tugs with increased horsepower were delivered to Boston Towboat, the Luna was gradually relegated to "back-up" status and was retired in 1971.

In the 1990's the Luna and her sister tug the Venus were abandoned in the Charles River in Boston, Massachusetts.

The tug was then used as an office and then as a floating home, until it was acquired by a non profit research institution in 1979. In 1991, both tugs sank.

In 1993, the Luna was salvaged and towed to Chelsea, Massachusetts where restoration efforts began.

The Luna was restored on a "shoestring" budget by Captain Frances Rose Gage and an army of volunteers. The " Luna Preservation Society" took responsibility for tug in 1995.

The Luna was declared a National Historic Landmark in 1989. Since being rescued from a graving dock in East Boston in early 1995, she has been rehabilitated for her role in Boston Harbor as an operating Landmark and educational vessel.

In October, 2000 the Luna was towed to Boothbay Harbor, Maine to begin an overhaul of her hull structure. She returned to Boston in May of 2002.

In October 2007, the Luna began a major rehabilitation of all three decks (pilothouse roof, boat deck, and main deck) as well as deckhouse structure and coamings; this work was completed in of May 2008 and was followed immediately by cleaning and coating of all original machinery and steel structure in her engine room. Plans are under development for the installation of a small, modern diesel engine for a "shadow" propulsion system for the tug. Permitting that the original machinery can be restored to its original appearance, despite corrosion damage suffered when the tug sank in fresh and salt water in the late 1980's and early 1990's.

It is expected that by early 2010 the rehabilitation process will be substantially complete. At that time, the Luna is expected to be on public display in Boston Harbor.
(Tug Luna Preservation Society)

Pictured as: the Luna (Boston Tow Boat) Photo by: Unknown

Pictured as: the Luna (Boston Tow Boat) Photo by: Unknown