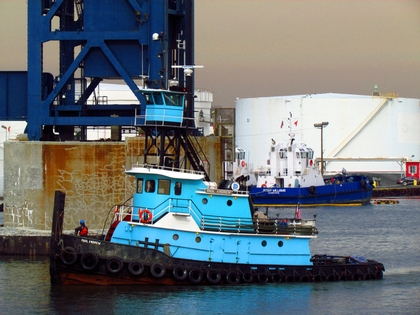 The tug was later acquired by Wallo Marine Incorporated of New Orleans, Louisiana. Where she retained her name.

In 1975, she was acquired by the Tug Leasing Corporation of Wilmington, Delaware. Where the was renamed as the Miss Elizabeth.

She was then acquired by S.C. Loveland Enterprises Incorporated of Philadelphia, Pennsylvania. Where she was renamed as the Miss Holly

The tug was later acquired by the DonJon Marine Company Incorporated of Hillside, New Jersey. Where she was renamed as the Paul Andrew.

Her electrical service is provided by two, 30kW generator sets. Driven by two, DD 3-71 diesel engines The tug's capacities are 17,000 gallons of fuel oil, and 6,000 gallons of water.

The towing equipment consists of two, Pullmaster M25, push winches mounted on her bow. Outfitted with 1 1/8(in) wire.
(Dan Owen)


Back to L.L. AND B. TOWING COMPANY INCORPORATED