In 1989, the tug was renamed the as the Dragon Lady. Named for Evelyn Berman, who was also known as the "Dragon Lady." Which she was nicknamed by her employees. Berman "took" to the nickname so much that she named the tug for it.

In 1994, the tug was acquired by Gateway Towing Company Incorporated of New Haven, Connecticut. Where she was renamed as the Bridgeport.

In 2019, she was phased out of active service and "laid up" at Gateway Terminal in New Haven, Connecticut.

In 2020, the tug was acquired by Mohawk Northeast Incorporated of Plantsville, Connecticut. Where she retained her name.

She was a twin screw tug, rated at 2,400 horsepower.
(Carel Boone, Greg Martini) 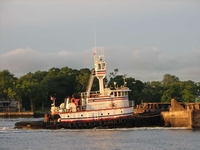 
Back to GATEWAY TOWING COMPANY INCORPORATED