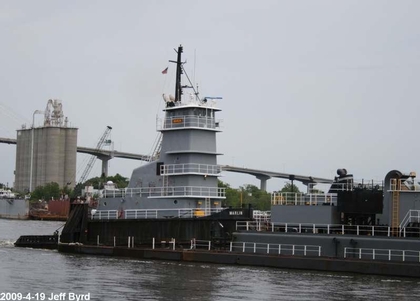 Built in 1974, by John Bludworth Shipyard of Corpus Christi, Texas as the Marlin for Penn Maritime of Stamford, Connecticut.

The tug was fitted with a Bludworth Coupler system. She is a twin screw tug rated at 4,200 horsepower.

She was married to a 449(ft) 60,000 bbl double hulled barge; the Gulfstream . Which was built in 1976, by Kelso Shipbuilding of Galveston, Texas as the Pampa for Penn Maritime. However, the barge was later renamed as the Gulfstream.

In 2011, the tug was "Laid Up" at Penn Maritime's yard in Staten Island, New York. In 2012, she was acquired by Panamanian interests. Where she retained her name.