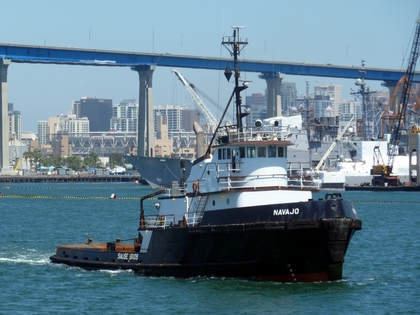 Pictured as: the Navajo (Sause Brothers) Photo by: Kyle Stubbs

Built in 1974, by the Service Machine Shipyard Amelia, Louisiana (hull #114) as the Capt. Andy for the Fonteneau and Smith Boat Company of Morgan City, Louisiana.

In 1978, she was acquired by the Gulf Fleet Marine Corporation, of Houston, Texas. Where the tug was renamed as the Gulf Ranger.

In 1995, the tug was acquired by the Sause Brothers Ocean Towing Company of Portland, Oregon. Where she was renamed as the Navajo.